NatureTrack is honored to be a recipient of “Sensorio Gives Back” on Sunday, December 12. Sensorio has generously supported many nonprofits since its opening in 2019. Thank you for selecting NatureTrack! We are forever grateful.

On Sunday, December 12, from 4:30 – 9:00 PM, NatureTrack will provide Freedom Trax complimentary to wheelchair users who would like to easily and independently enjoy Sensorio.

NatureTrack will have six Freedom Trax at the door next to the display table. We will provide Freedom Trax on a first-come, first-served basis. If you have any questions about using one of NatureTrack’s Freedom Trax, email sue@naturetrack.org or call or text her at 805-886-2047.

Thank you again to Sensorio for their generous support of NatureTrack.

Los Olivos, Calif. (July 30, 2020)— Dozens of documentaries and short films from 21 countries, in both live and animated form, will be screened virtually at the third annual NatureTrack Film Festival(NTFF). From exhilarating and adrenaline inducing, to wonderous and spectacular, from heart-breaking to hope-filled, discover inspiring stories from passionate filmmakers about the world we live in and share with the other animals on earth. Save the second week of October (10/9-10/18) for a film festival delivered to your home – the safest environment for our patrons during the Corona virus pandemic. All tickets previously purchased for the festival in March will be honored.

Festival directors are saddened to have to cancel the live three-day event and move to a virtual-only festival, but given the current crisis, it is the only way to share all the incredible films. NTFF founder Sue Eisaguirre said, “In 2021, look for NatureTrack Film Festival ON TOUR, and in 2022 we will be back in person. We look forward to making our beloved town of Los Olivos pop in a most festive way and to celebrating the filmmakers whose passion leads the way.”

Of special interest to conservationists -Goleta-based FLIR, a returning NTFF sponsor, has provided a two-minute short as a companion piece to the feature film Birth of a Pride. FLIR has been working with the World Wildlife Fund’s Wildlife Crime Technology Project to put an end to illegal poaching in Africa. FLIR’s infrared camera technology, paired with cutting-edge software,has become the newest tool to tamp down this rampant problem for the beloved majestic wildlife found on the African continent. NTFF’s producers wanted to give patrons a look at how thermal imaging is used in the wild. Making this presentation eventimelier, these thermal imaging solutions from FLIR are in use now at businesses, airports, and other places that can help screen for elevated body/skin temperature – a possible sign of COVID-19 infection. From public spaces such as airports and train terminals to federal buildings, private offices, and factories – deploying thermal imaging cameras for screening provides a more safe and secure environment for all.

In the extreme adventure film By Handtwo Pismo Beach brothers paddle by hand from Alaska to Baja, unaided by anyone else, just the Higginbotham twins in a coming of age story with nature as their mentor. No motors to propel them, no support boats, their custom-made boards carried everything, and they paddled more than 2,000 miles with only director Kellen Keene’s camera keeping them company. By Hand has been scooping up awards at film festivals this year; you don’t want to miss what many are calling this year’s “Free Solo.”

The Lost Kings of Biokoby Oliver Goetzel, whose films have taken awards at the first two NTFF events, returns with another endangered species in his lens, one of the world’s least-known primate species, the Drill Monkey. Off the coast of Central Africa lies Bioko, an isolated island covered by ancient rainforests and surrounded by dark ocean waters. Island folklore tells of a Drill king who ruled the island’s forests, a place where Drills still play a critical role in the health of an ecosystem known to scientists as a biodiversity hotspot. The film takes on subjects most of the world is unaware of in Goetzl’s quest to create a brighter future for the Drills through science and, most importantly, species protection. Oliver also created “Making of Lost Kings of Bioko,” a special behind-the-scenes bonus short just for the NatureTrack Film Festival. This twofer is a must-see.

Another past NTFF award-winner, Matthias Mayr, goes to the Arctic’s northernmost mountain range in the world for his 83° Ski the North. Joined by adventurer Hauni Haunholder the two set off to ski the Arctic Cordillera and as the saying goes, “it’s the journey not the destination” as the men encounter major athletic and filmmaking challenges. The Ellesmere Island location is home to arctic wolves, polar bears and native Inuit people who actively support the intrepid mountaineers.

Bringing the personal story of Madame Kokoly to the NTFF, U.K. filmmakers Garth Cripps and Paul Antion capture a wide-angle look at the world’s marine environment through the close-up story of a traditional Vezo fisherwoman in Madagascar. Living in extreme poverty, Madame Kokoly reflects on her personal losses and life experiences, and the ocean she fishes which is changing beyond her control. Female only voices are represented in this heartbreaking film. Kokolyis a short documentary film, produced by Blue Ventures, and supported by Stories of Change, a project of the Sundance Institute, with support from the Skoll Foundation.

Getting down and dirty,Threats in the Northern Seasdirector Jacques Loeuille from France brings light to silent and deadly underwater witnesses from WWI and WWII – three billion tons, yes tons, of chemical and conventional bombs that lie at the bottom of the North and Baltic seas. Loeuille’s film examines the underwater stockpile of lethal munitions and takes on the cause of defending the survival of our vital oceans and seas. Why were these weapons dumped and are these massive watery caches of highly toxic ordnance an avoidable disaster? Sue Eisaguirre says she has discovered that NTFF patrons are “proactive people for our natural world, and this film will educate you about the dangers and natural disasters caused by climate change.”

The entire list of participating films is posted on the festival website. All-Access Passes, and single tickets are now available and may be purchased by going to the NTFF website, www.NatureTrackFilmFestival.org. One hundred percent of the proceeds from the festival go to support the NatureTrack Foundation. All tickets from the March 2020 dates will be honored. Cost for an All-Access “Virtual” Pass is $100. Those who earlier purchased an in-person All-Access Pass, we suggest either sharing the pass with a friend, or donating the difference in cost to the NatureTrack Foundation as a much-needed gift.

The 2020 NatureTrack Film Festival will be a virtual week-long celebration of nature and outdoor adventure through film. Los Olivos, California in the heart of Santa Barbara wine country, is where the festival was founded in 2018 by Sue Eisaguirre, who conceived the idea as an extension of, and fundraiser for, the non-profit NatureTrack Foundation which she started in 2011. NatureTrack introduces schoolchildren to outdoor spaces from the seashore to the inland oak woodlands of Santa Barbara County by providing cost-free outdoor field trips. Since it began, NatureTrack has provided more than 22,000 outdoor experiences for school-aged students. More information about NatureTrack Foundation can be found at www.naturetrack.org.

The NatureTrack Almost 5K Run winds through the quaint downtown, charming neighborhoods, and quiet countryside of Los Olivos, California. As you run, in addition to the beautiful views, you’ll enjoy knowing that your race registration is supporting NatureTrack!

After the race, you can enjoy Los Olivos’ most highly acclaimed festival of the year…the popular Day in the Country. The NatureTrack Almost 5K Run, (for serious, recreational, and furry runners), kicks-off this Los Olivos tradition that celebrates the magic of small-town, country living. With the NatureTrack Almost 5K Run; a parade; tractor show; over a hundred local and regional crafters, artists, and food purveyors; live music; wine tastings; and a beer garden, you’ll find post-race fun for the whole family!

Register today!  Join the fun and enjoy a “day in the country!” 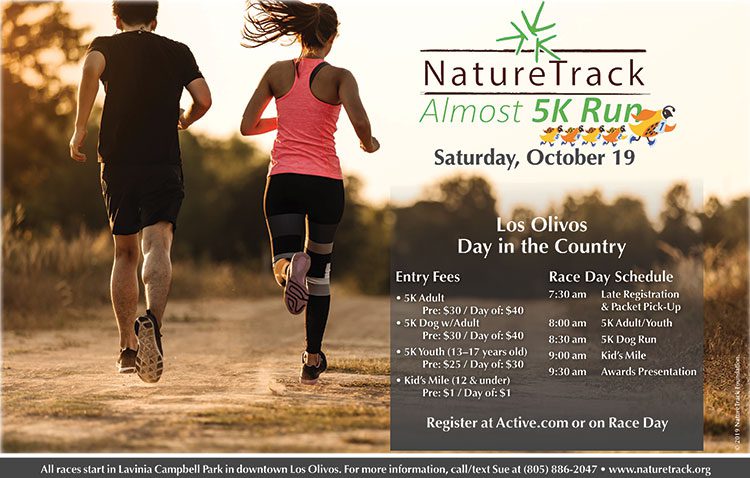 Astounding films from around the world curated to excite, energize, and deepen your connection to the outdoors through the power of film.

Over 50 films from around the world.

CEC is proud to sponsor the new Nature Track film festival, where nature takes center stage on screen and blooms in abundance throughout one of California’s most scenic valleys. Offering 50 films from around the world, the event affords visitors the ability to easily stroll the town between films to enjoy wine tasting, unique shopping, world-class cuisine, and talks with filmmakers.

The kick-off is happening on Friday, March 23, 2018, with an opening reception preceding a full evening of films. A full slate of films will be offered on Saturday, and the festival will conclude on Sunday with a half day of programming and a closing reception.

NatureTrack will also be offering docent-led hikes for those wishing to take advantage of the abundant natural beauty of the Santa Ynez Valley for a more immersive outdoor experience. So don’t forget your outdoor footwear or hiking boots! The festival is timed to take advantage of the explosive wildflower bloom that carpets the local Santa Ynez Valley hillsides and nearby Grass Mountain in particular. This is a not-to-be-missed nature event that attracts wildflower enthusiasts from all over the Valley, California, and beyond.

A variety of ticket options are available, ranging from $10 for a single show ($7 for students) to $400 all-inclusive packages that add in dinners, filmmaker discussions, and more. Visit https://naturetrackfilmfestival.org/ for full details and to purchase tickets. 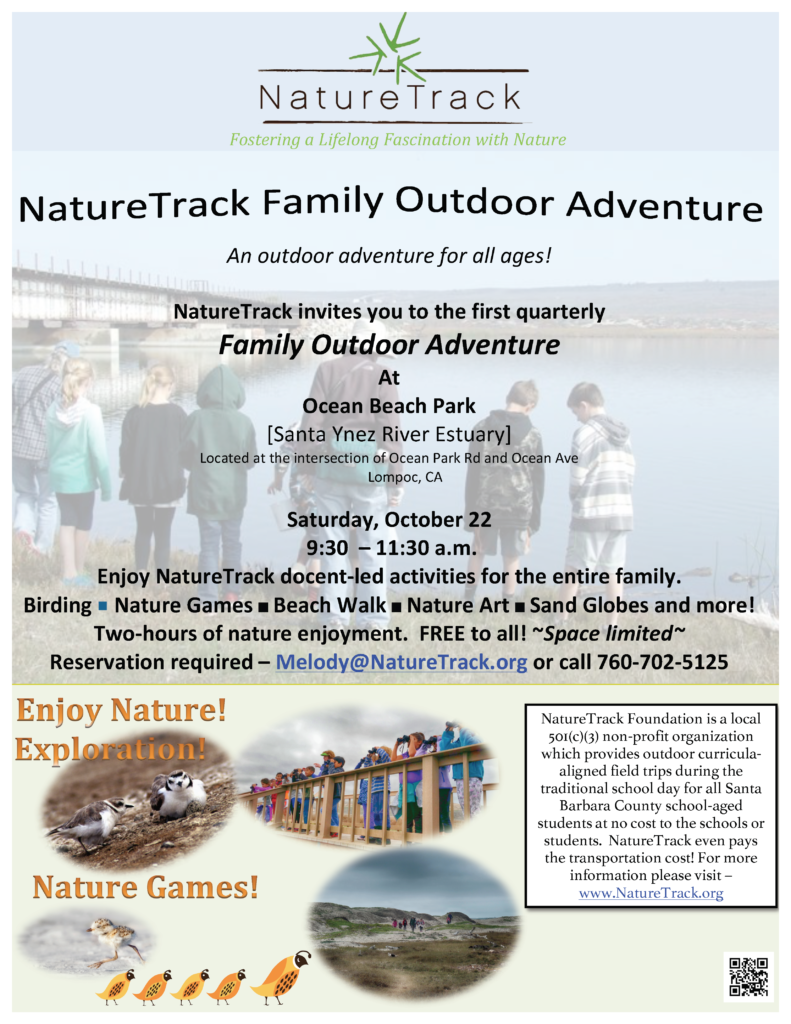 Reserve now! Space is limited to the first 30 people who RSVP. 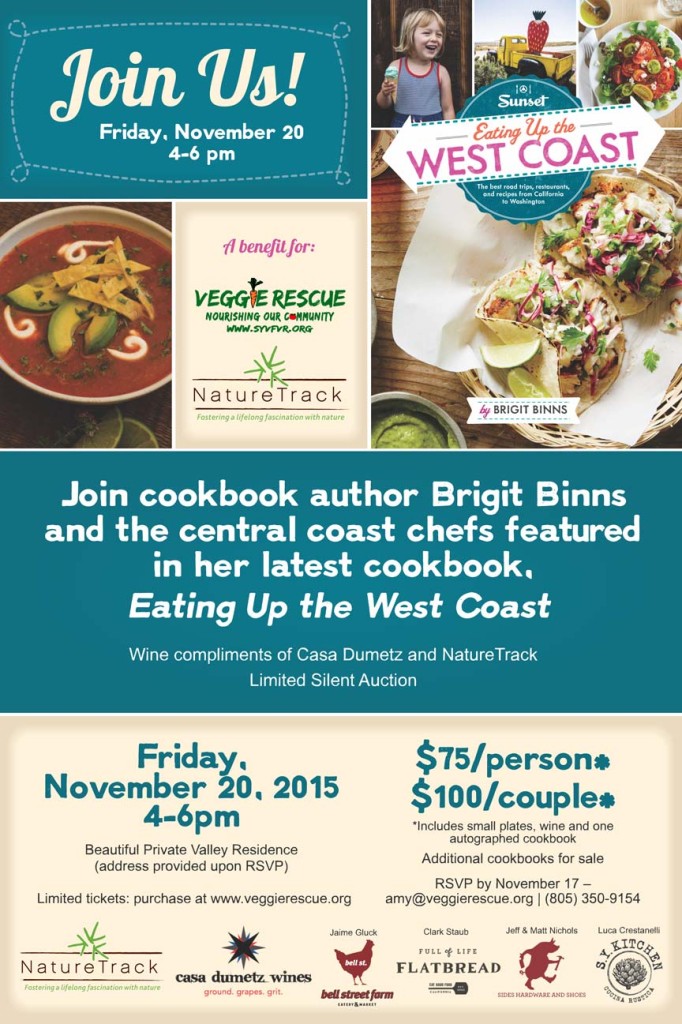 Social Venture Partners awarded Nature Track the Sponsor’s Award as well as a finalist prize for a total of $6K of the total $45k in prizes at Fast Pitch Santa Barbara 2015 event October 15th!

The SVP Fast Pitch SB 2015 offered ten finalists the opportunity to work with marketing coaches on a well-crafted pitch for their organization. The Fast Pitch SB event at Deckers’ Routunda in October show-cased the amazing finalists for a live audience. Six judges and the audience selected winners following ten amazing pitches of the needs for each non-profit. It was an education in social needs of Santa Barbara County!

Sue Eisaguirre’s pitch for nature field trips landed on receptive ears for the Nature Track Foundation! In addition to the prize money, she has been invited to make her pitch to funding sources based on the exposure afforded by SVP Fast Pitch SB! The value of the coaching, the camaraderie for NT docents, and the showcase experience along with the cash awards made this a winner for Nature Track to go forward to carry on the mission. 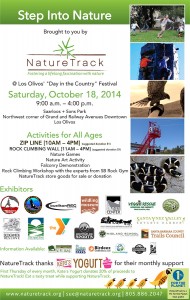 Join NatureTrack at “Step into Nature” during Los Olivos’ 34th Annual Day in the Country event, Saturday, October 18!
9AM – 4PM

Located at the corner of Grand and Railway, the entire Saarloos + Sons park area will be transformed into a nature playground where you’ll find fun for the whole family. “Step into Nature” is the place to enjoy nature activities, learn about the many organizations that provide outdoor adventures, and see live falcons, hawks, and reptiles!

You won’t want to miss these exciting opportunities…

NatureTrack is pleased to partner with all of the organizations and individuals dedicated to sharing the wonder of nature and the outdoors with our kids, neighbors, and visitors.  We’re looking forward to sharing our passion for the natural world with the thousands of folks who enjoy Day in the Country each year.